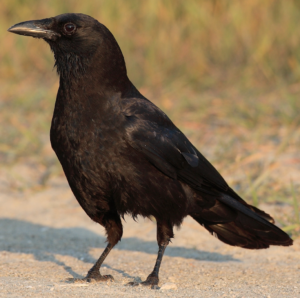 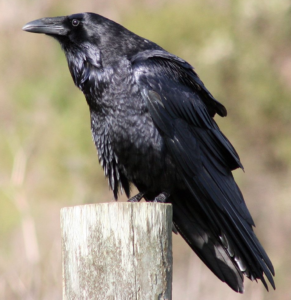 You’re likely to encounter both American Crows and Common Ravens during your cycling tour along the Icefields Parkway.

If you’re perplexed by the identity of two commonly seen big black birds in the Rocky Mountain national parks, you’re not alone. We frequently get asked for tips on how to tell these birds apart.

It’s fairly easy to tell them apart if you hear them. The crow caws and the raven croaks. But what if the big black bird you see is not cawing or croaking?

One trick that helps me tell the difference is to focus on the beak. A raven’s beak looks like it can do a lot of damage. It’s really big and heavy and it’s got a nasty-looking curve. A crow has a more slender bill.

They use tools, can reason and problem solve and can recognize human faces. Watch closely and you can catch a glimpse of their intelligence for yourself.

Next time you see crows or ravens along the road while you’re driving, you’ll notice some birds have learned traffic rules well enough to confidently hold their position inside the white line, even with vehicles passing by just centimetres away.

The chart below details the differences between crows and ravens.