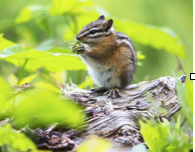 Cyclists riding with Mountain Madness Tours along the Icefields Parkway often see both chipmunks and golden-mantled ground squirrels. These cute little rodents are entertaining to watch, as both species are curious and will approach people. They zoom about during the day, busily gathering food – pine and spruce seeds, berries, grass and sometimes mushrooms and a few insects. They’re also cautious, always on the look out for enemies such as hawks and coyotes. Both the chipmunk and golden-mantled ground squirrel spend winters underground in burrows. In the Alberta Rockies, they may spend more than 8 months underground.

There’s one secret to differentiating between the two. The chipmunk has stripes on its face, while the golden-mantled ground squirrel does not.