People of the Parkway – Part 2. The Fur Trade 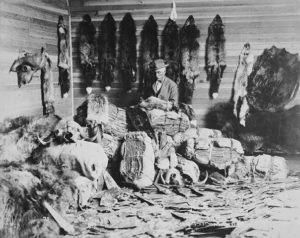 A fur trader in Fort Chipewyan, Northwest Territories in the 1890s. Credit: Library and Archives Canada/C-001229

The fur trade was a driving force behind the development of Canada as a nation, but it started quite by accident. European fishermen drying cod in Newfoundland to sell in Europe, traded cloth with First Nations people who brought them furs in exchange. The fishermen found a ready market for the furs in Europe and it wasn’t long before enterprising Europeans recognized the trade of furs as a tremendous economic opportunity. As a result, Quebec City was founded in 1608 by the French to trade with First Nations for beaver, otter, fox, mink and other fur pelts.

North West Company In 1779, the North West Company was established and became the HBC’s main rival. With an ever-increasing European demand for furs, the Hudson’s Bay Company and North West Company pushed westward. Competition between the two companies to establish trading posts in new territories drove exploration. Both companies employed courageous, skilled men who described the lands, First Nation peoples, wildlife and plants. Their maps and journals provided a wealth of knowledge, necessary to the establishment of Canada as a nation.

David Thompson Crosses Howse Pass, 1807 On a Hudson’s Bay Company mission to establish trading posts in the Columbia River Valley and trade with the Ktunaxa, David Thompson sent scouts over what is now Howse Pass in 1806 and climbed the pass himself in 1807. The pass was named after Hudson’s Bay Company factor Joseph Howse, who crossed the pass two years later in 1809.

Decline of the Fur Trade In the 1830’s the popularity of silk hats grew while demand for hats made from felted beaver fur dropped, heralding the end of the fur-trade era. Trade in furs continued to decline, but interest in other resources such as land and timber supplied the push for further exploration.