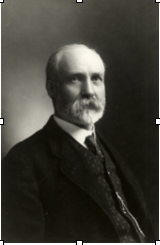 Arthur Coleman Discovers the Icefields Parkway Route, 1884
In 1884, Arthur Coleman, a geology professor at the University of Toronto, arrived in the Rockies on a quest to find a mysterious mountain he’d read about in an 1827 entry of the journal of David Douglas, a Hudson’s Bay Company botanist. Although he was unsuccessful in finding Douglas’s unnamed mountain, Professor Coleman described the route the Icefields Parkway would eventually take. 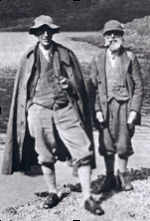 J Norman Collie Names 30+ Peaks, 1898 – 1911
J Norman Collie (at left in photo) was a British scientist who began climbing when he was around the age of 27. He climbed peaks on the Isle of Skye, then the alps, Caucasus and was the first to attempt to summit Nanga Parbat in the Himalayas. In 1897, he was invited by Appalachian Club founder Charles Fay to climb in the Canadian Rockies. He made five trips to the Canadian Rockies, naming more than 30 peaks and making 21 first ascents. The only peak along Icefields Parkway that still bears the name it was given by Collie is Diadem Peak. Others along the Parkway that were originally named by the climber include Mount Kitchener (originally Mount Douglas) and Mount Chephren (originally Pyramid Mountain). 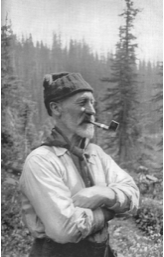 Arthur Wheeler Predicts Worldwide Fame of Icefields Parkway, 1920
In 1920, Arthur Wheeler, the principal land surveyor responsible for plotting the Alberta/British Columbia border, predicted that if a road were to be built, it would be a “wonder trail” that would become “world renowned.” The road was built. It truly has become a world-renowned wonder trail.

Wheeler was about 16 years old when he came to Canada from Ireland with his family. He apprenticed as a Dominion Land Surveyor in Ontario and later went west to survey First Nations reservations and mountain ranges in Alberta and British Columbia.

He was working with the Boundary Commission during WWI which explains why so many of the peaks which he named in the Kananaskis area are connected to people and events of the war.