An interview with The Crossing Resort

The Crossing Resort: A Family-Run Hotel in the Canadian Rockies

By Mike Fikowski, as told to Tammie Burak

The Crossing Resort in Banff National Park at Saskatchewan River Crossing in Alberta, offers motel accommodations and restaurant food services to travelers along the Icefields Parkway and David Thompson Highway. Read on to learn more about this family-operated resort and the Fikowski family team.

“Dad was a fighter pilot,” says Mike Fikowski, , general manager of The Crossing Resort, when asked how his family came into ownership of the resort on the Icefields Parkway mid-way between Banff and Jasper. A dynamic individual with a work ethic that supported his endeavours, Mike Sr.’s list of accomplishments also included professional boxing and diving for marine salvage. In short, Mike remembers his dad as “a man of action and a risk-taker,” valuable qualities to have if you want to go into business for yourself.

First Steps in the Hotel Business

After his stint in the military, Mike Sr. decided to try out the hospitality industry and bought a hotel in a small town in Alberta. “When he got out of the air force in 1963,” recalls Mike of his father, “he and his brother bought the Victoria Hotel in Olds.” Mike Sr. had found his passion.

With four young children Mike Sr. saw the potential for developing a family business in the hotel industry. The purchase of the Victoria Hotel was the first step in a series of moves that eventually culminated in the purchase of The Crossing.

The Fikowskis Purchase The Crossing

In 1975 The Crossing’s owner, Naomi Schmid put the property up for sale. Mike Sr. and his eldest son Mike, who was 18 years old at the time, drove out to the property in March 1975. They shovelled snow to access the buildings and carried lanterns to view the resort which at that time included a couple of small buildings and 12 cabins. Mike Sr. liked what he saw and purchased the property.

Learning on the Job

Mike, his two brothers and his sister worked weekends and summers at the resort. They learned what they needed to know to run the lodge through hands-on experience, doing whatever jobs were necessary. “We did everything,” recalls Mike, adding, “It was my job to make sure the heaters were working and the generator was running properly.”

But before starting to work for their dad full time, Mike Sr. required that each of his children work at least one year for someone else to learn new skills and gain fresh perspectives. He didn’t want his children to think just like him, but encouraged different points of view and discussion. He believed this kind of openness would strengthen their business.

Seeing the need for overnight accommodations, in 1979-’80 the Fikowski family completed a major expansion of the resort, adding 65 motel rooms and a pub.

But tragedy struck in the midst of the development project. It was in 1979 that Mike’s sister, 15-year-old Valerie Mae was killed in a car accident. About a year later, Mike Sr. was diagnosed with Lou Gehrig’s disease (ALS), a degenerative neurological disease. He died in 1985.

The three remaining sons continued to operate The Crossing and have supported each other as they’ve shouldered the responsibilities of running the resort. Despite hardships, the Fikowski brothers consider themselves fortunate to have grown up at The Crossing where work was often mingled with adventure. “We did a lot of exploring by horseback,” Mike recalls.

Frequent visits from Banff area legends kept the boys informed and entertained. Jim Simpson, the son of the famed Jimmy Simpson, one of the Canadian Rockies’ first guides, and Paul Peyto, nephew of Banff’s iconic “Wild Bill” Peyto, often shared their stories and helpful tips with the Fikowski brothers.

Over the years, the resort has hosted many other famous people, too. “Mom was scooping ice cream one day when one of her favourite actors stepped up and asked her for a cone,” recalls Mike. It was James Garner, the star of The Rockford Files. Other celebrities who’ve stopped in include Alec Baldwin who was filming The Edge nearby. There have also been members of royal families, some well-known, others less well-known.

The resort has been the setting for some strange encounters, as well. Mike remembers one particularly unsettling incident with an irate visitor just a year after the Fikowski family purchased the resort.

“We had a white rail fence around our septic field,” Mike explains. Somehow, it seems, a visitor mistook the fence for a flimsy wildlife enclosure.

“The fellow came walking up to Dad and said, ‘You’re the owner of this place?’

“‘You should lock up your bears!’ the man fumed. ‘That bear of yours took a swipe at us!’”

Apparently, the man had spotted a bear near the septic fence and had tried to set his small daughter on the bear’s back for a photo. Understandably, the wild bear had swatted at the intruder.

No matter how much he tried, Mike’s dad was unable to convince the man that the bear did not belong to the Fikowskis but was a wild animal and should have been left alone. The furious visitor even went so far as to write a letter of complaint to the Minister of Tourism.

Mike is still sometimes amazed by the foolish things that people do around wildlife. “I’m very surprised more people aren’t hurt,” he says, noting that all wildlife should be left alone and observed only from a safe distance.

Throughout their years in the business, the Fikowski family has weathered many storms that have sunk other businesses. “Many of the years we’ve been in the business, times have been pretty tough,” says Mike, listing a variety of political, social, health, and economic upheavals that have hit tourism in the Rocky Mountain national parks. The challenges seem only to have strengthened the Fikowski family team.

Justifiably, it’s the positive working relationship Mike has shared with his brothers over the decades that fills him most with pride. Each brother has grown into the role he’s best suited for, explains Mike. “Doug is vice president of operations and Bruce is controller.”

Mike recognizes his mother, Connie, as the first wife and mother in the family to have filled dual roles as mother and business-wife. “She set the bar high,” he says remembering her untiring efforts as she raised a family while participating in business operations in both Olds and Saskatchewan Crossing. “Every summer, she’d pick up and move the whole family out to the resort,” Mike says.

“Mom has been the foundation of the whole business,” he says. He adds, “She can still whip me into shape over the phone when she needs to.” He laughs as he remembers the time she was presented with business cards that stated her official company titles as “President” and “Mother.”

When the Fikowski brothers began to marry, their wives and children became involved in the business. Mike has high esteem for the women in the family, not only for their hard work, but for their positive attitudes toward adapting to the sometimes-difficult demands involved in balancing family life with business. Raising their families in nearby communities has resulted in spouses living apart seasonally as the Fikowski brothers returned to the resort for summer operations. “The wives deserve huge kudos for the strength and adaptability they’ve shown over the years,” says Mike. “The wives have really stepped up to the plate and made it all work.”

Over the years, spouses and children have all played significant roles. “When things need to be done, everyone jumps in without hesitation and does their best,” says Mike. “We’re grateful for our children – all 11 of them – and the fact that they all get along and respect each other.”

Together, the family has worked hard at enhancing the already breathtaking setting and the facility, with landscaping, renovations, interpretive displays, interior decorating, and a range of other projects. Everyone is involved in building the resort’s success.

Mike also credits their great staff for making The Crossing an enjoyable experience for guests, pointing out the impressive retention rates of senior staff, some of whom have been with the resort since the late 1980’s. “People don’t stick around unless they’re being treated properly and feel part of something special. We take pride in that,” he says, explaining the active role that managers play in the decision-making process. He adds, “It truly is a team that supports this resort.”

Regardless of what their official job descriptions might be, The Crossing’s general manager is quick to point out, that just as in any healthy and flourishing family, senior staff, like parents in a smoothly running home, will step in whenever and wherever needed. When they’re short-staffed, owners and managers roll up their sleeves and make beds, pump gas, or scoop ice cream. It’s all part of the team effort that keeps the resort running efficiently.

In addition, The Crossing annually hires 60-65 seasonal staff, mostly young people. Like a father who’s been offended by derogatory remarks made about his kids, Mike takes exception to the negative generalizations about the younger generation that he hears from time to time. “There are a lot of good kids out there who work their butts off,” he says, “and then go hiking after putting in a full shift.” Young people who take jobs at The Crossing are hard workers and many of them are saving money for school, and are also experiencing independence for the first time. Although they’re excited about exploring the Rockies on their off-hours, some are willing to put in extra shifts after their regular work hours, as well. Mike’s respect for the resort’s hard-working summer staff is obvious.

A Homey and Welcoming Resort

The Fikowski family’s philosophy is made apparent to visitors in the friendly staff and welcoming atmosphere of the resort. Homey touches like the guest lounge with its big comfortable sofas and hummingbird feeders near motel windows are also signature marks of the Fikowski family’s business style. Despite its busyness at peak times, the place has an inviting, cozy feel.

“The common thread throughout the years has been family,” says Mike. “We share the same work ethic and supportive attitude toward one another.” Summing up the family’s guiding principle he says, “The Crossing is a family business operated in a family style.” 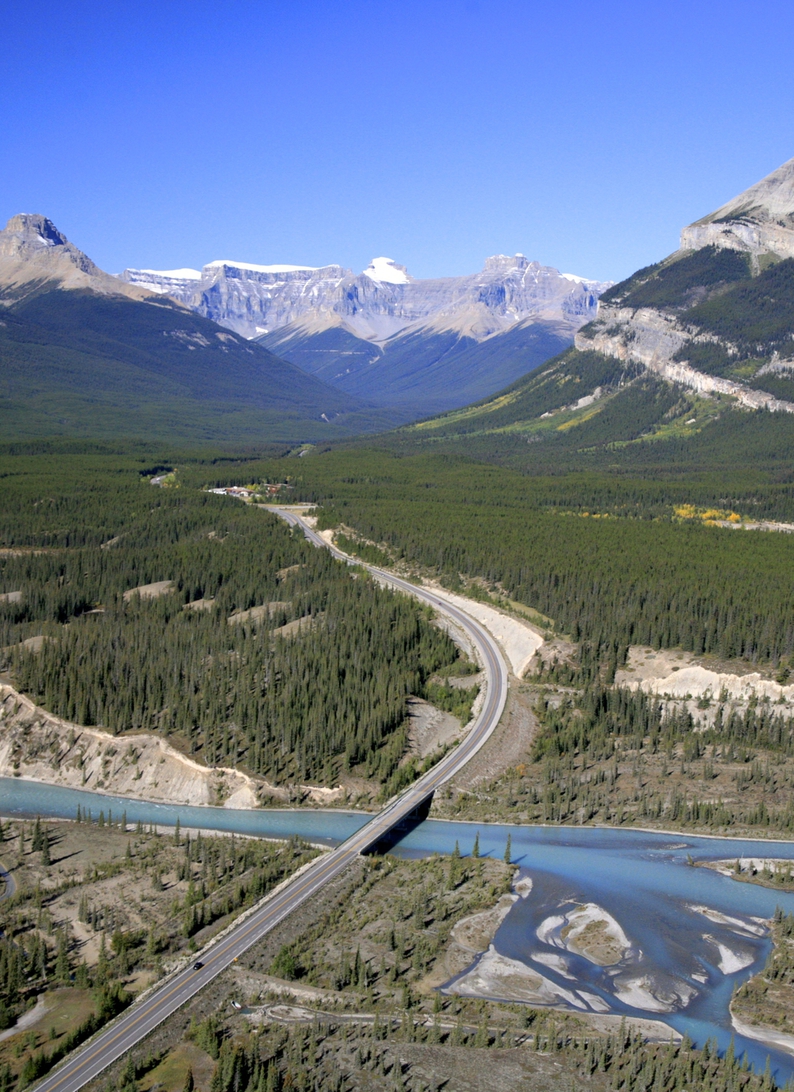 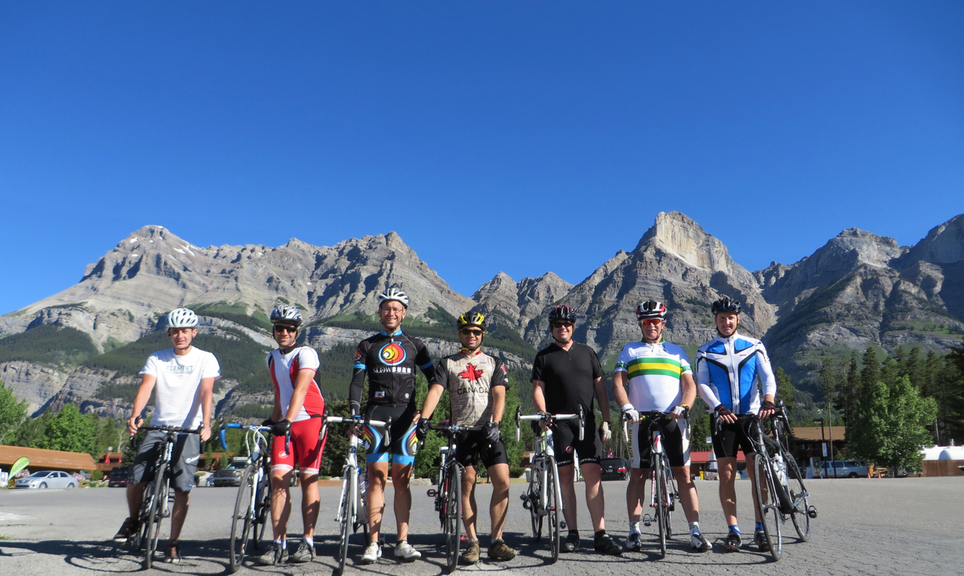 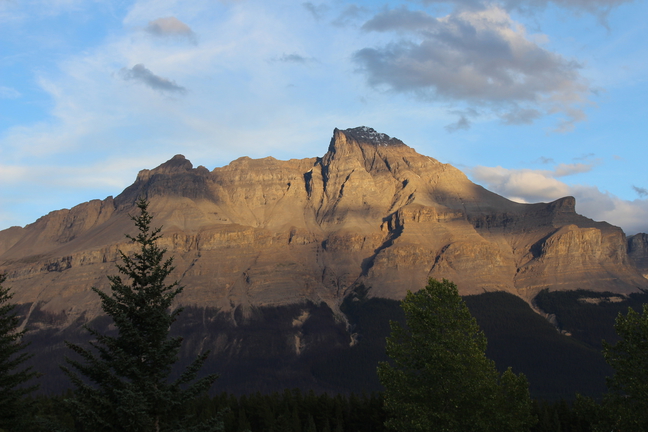 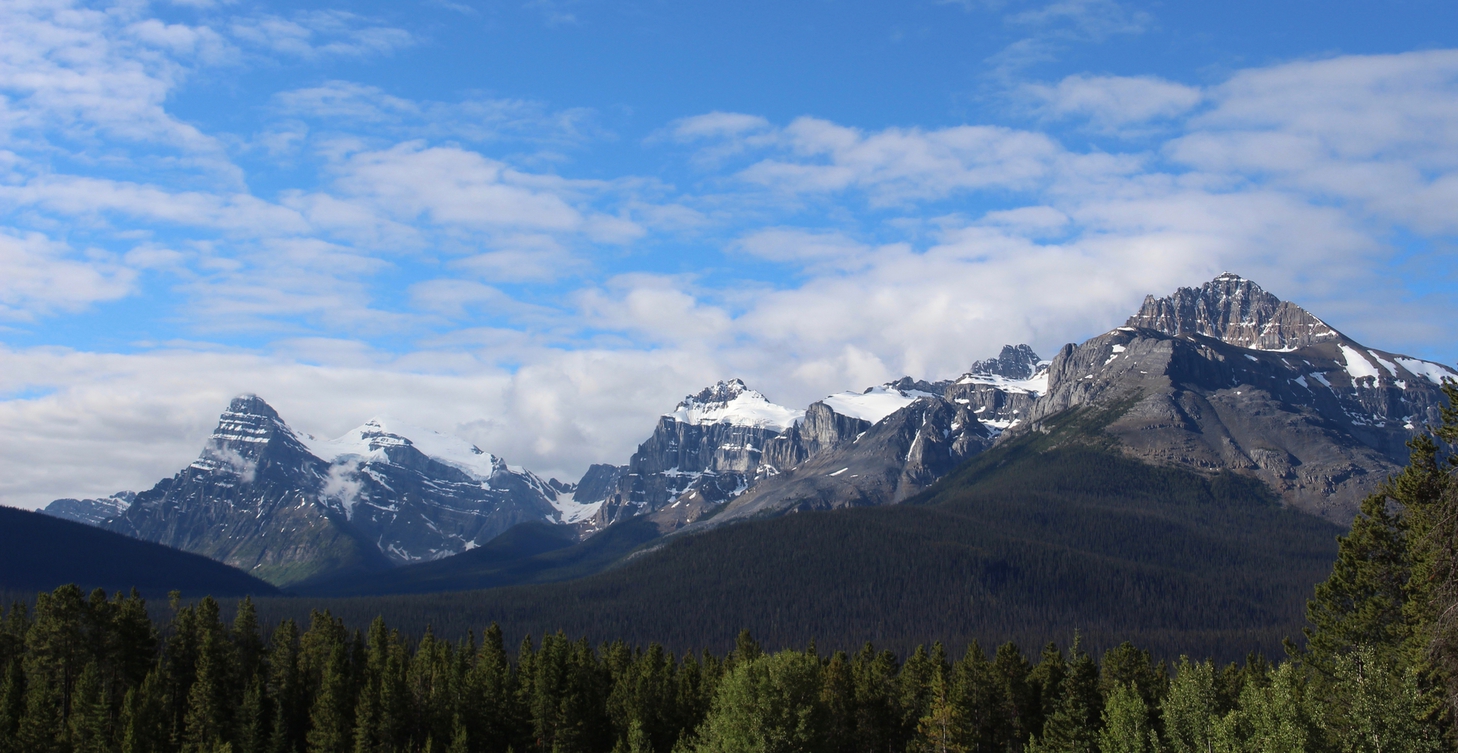 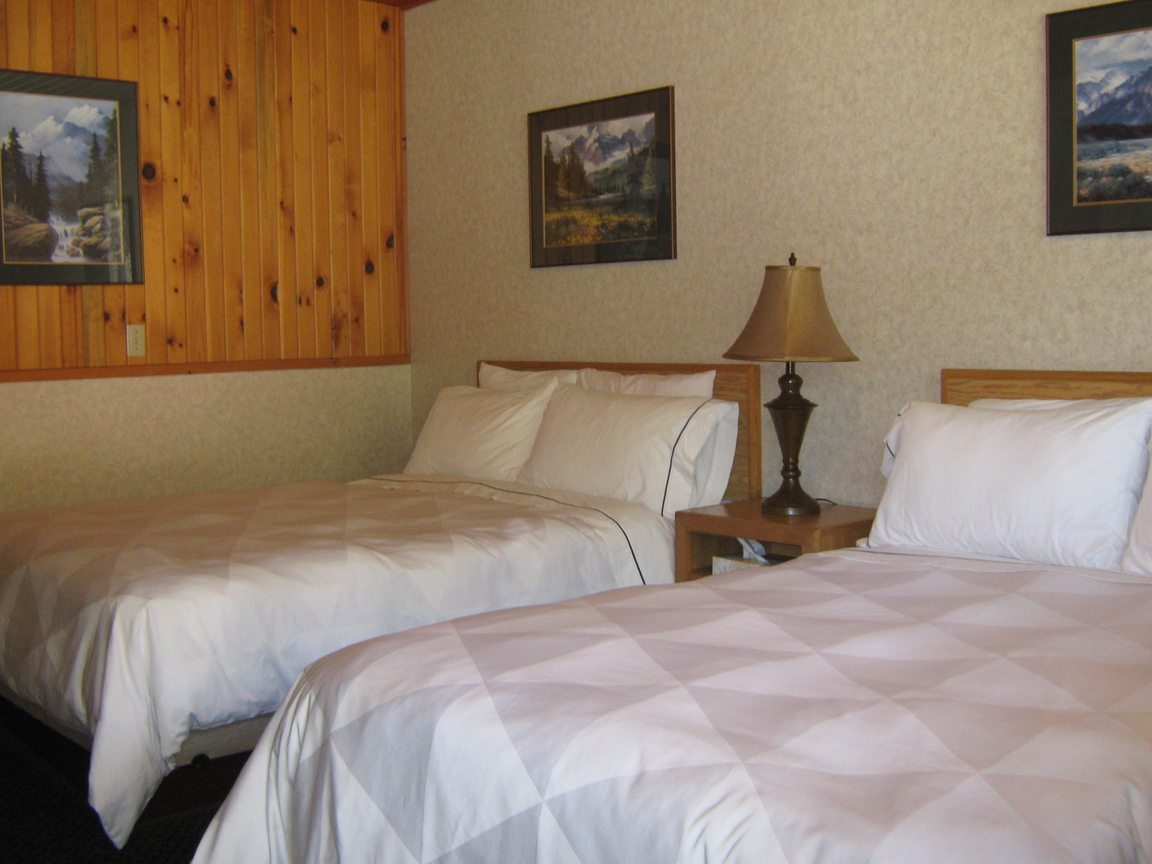 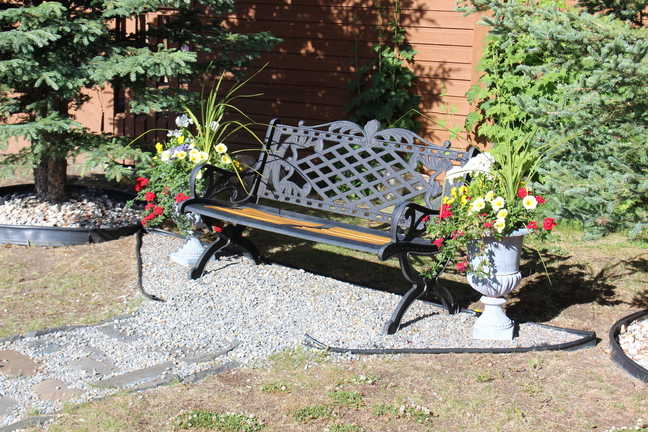 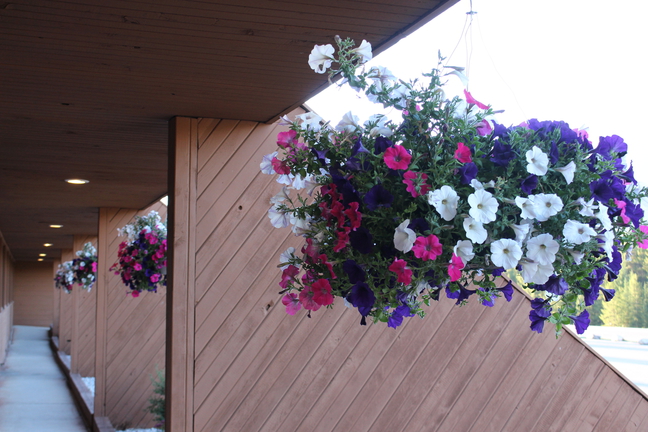 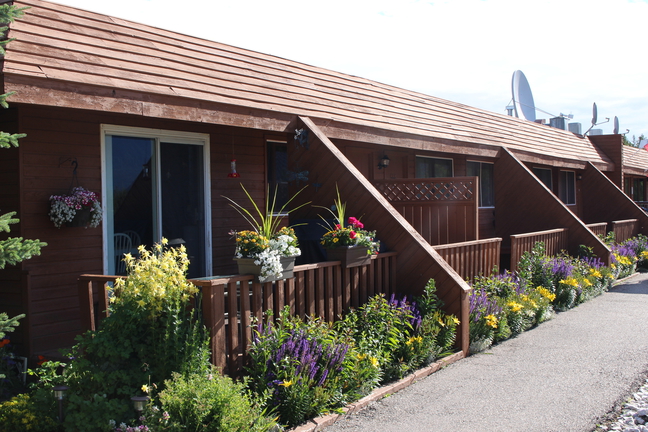